Oppose the United Daughters of the Confederacy in Atlanta, November 9th at 1PM, 2019

On November 7-11, 2019, the United Daughters of the Confederacy (UDC) held their annual convention at the Marriott Century Center in Atlanta.  FLOWER organized the largest, loudest, most energetic protest in the history of the UDC convention.

The police not only barricaded the entrance to the Marriott hotel, they blocked the entrance to the entire Century office park. The cost of lost business as a result of this paranoid move is the fault of the UDC and also the Marriott, who had previously been warned that they would face financial and social consequences if they allowed a hate group convention on their property. 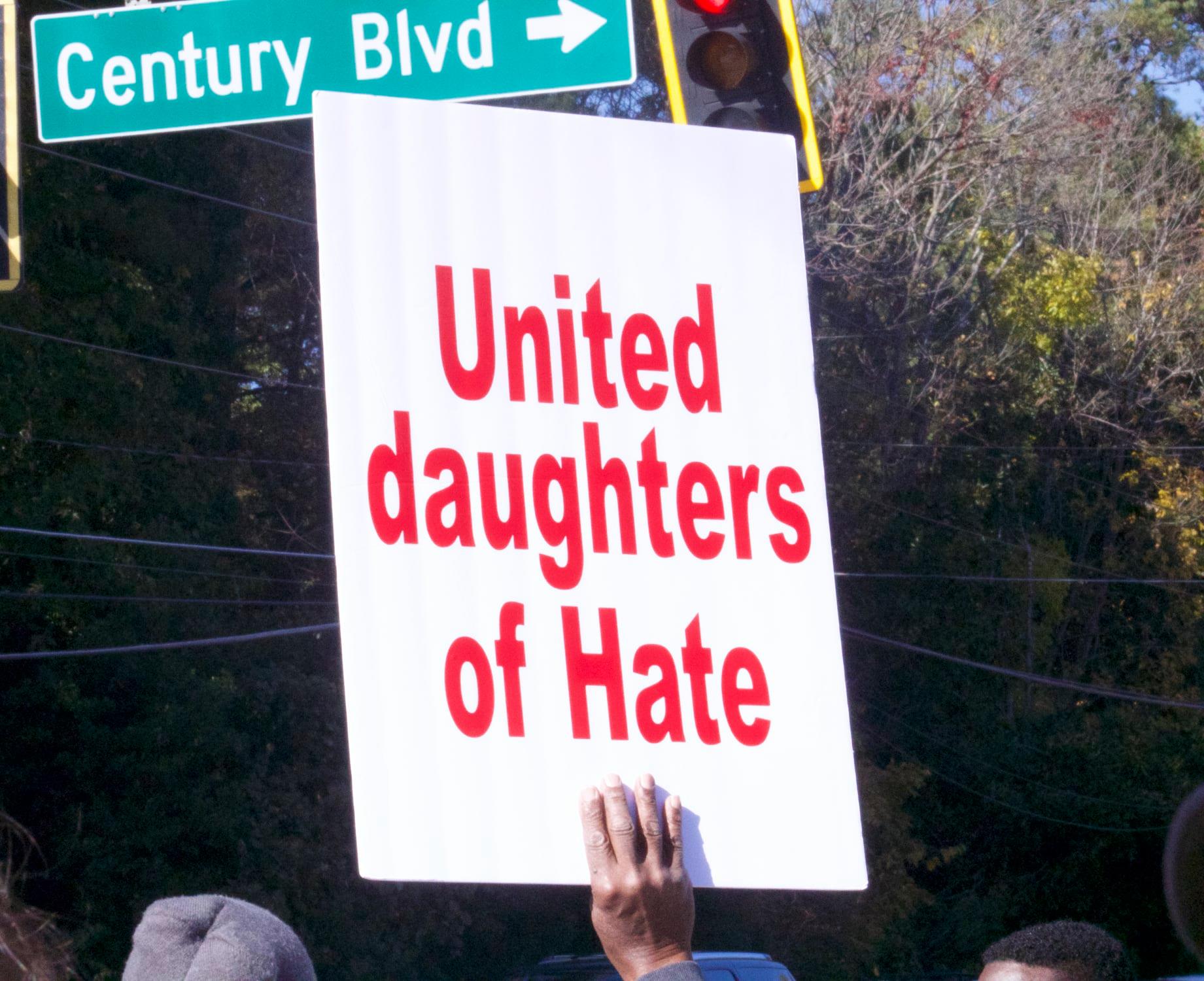 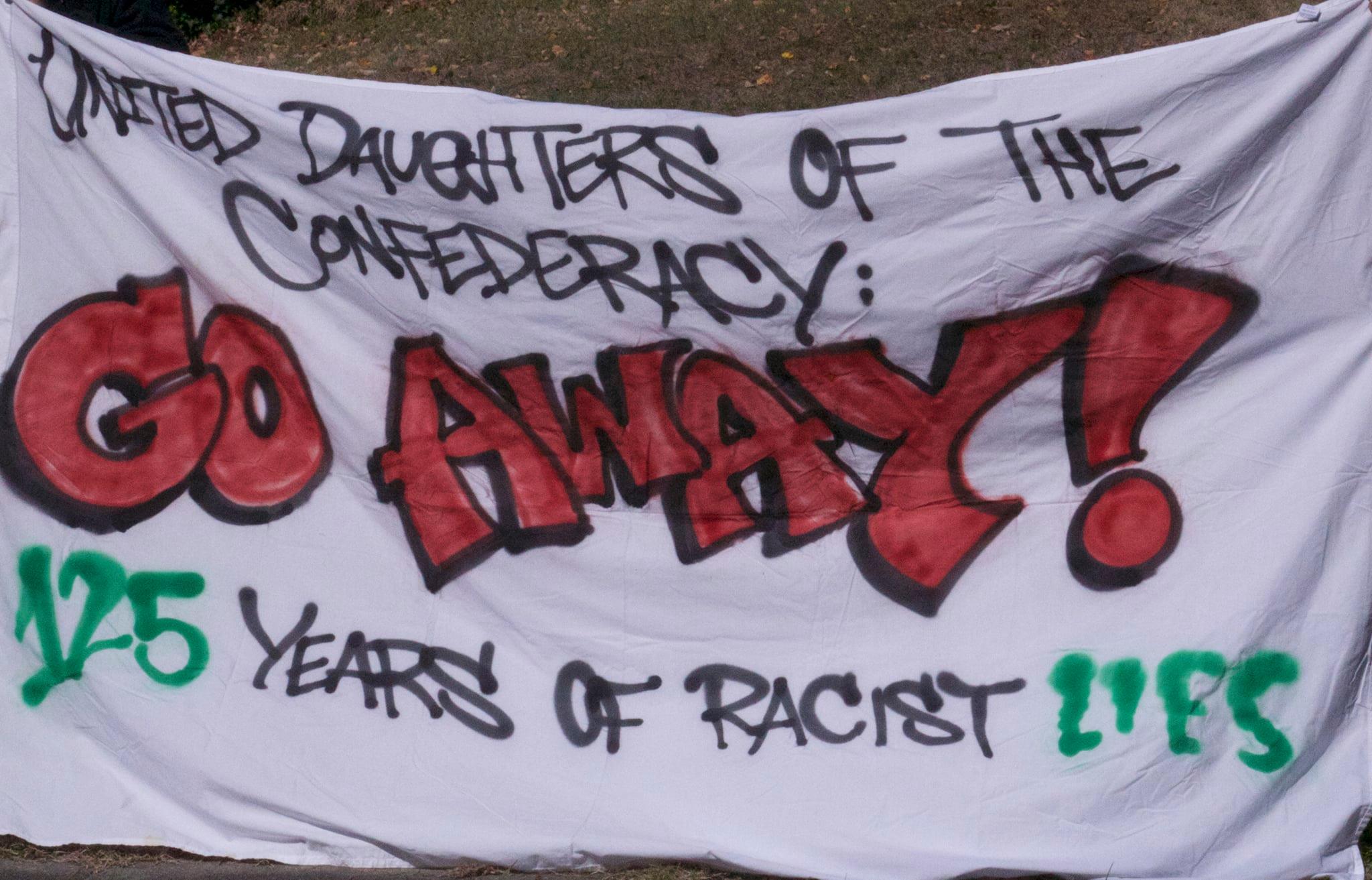 Who ARE the UDC?

The United Daughters of the Confederacy were founded in 1894 as a hereditary organization to commemorate the Confederacy. In its early years, the UDC worked hand in hand with the KKK and promoted the “Lost Cause”, a propaganda narrative that sanitizes slavery and erases the history of Black people. Racist monuments erected by the UDC litter the landscape of the South to this day.

The F.L.O.W.E.R. coalition stopped a KKK and Neo-Nazi rally at Stone Mountain. We have seen how racist monuments inspire white supremacists, give them comfort, and spur them into violence against our communities, but we have also seen how to fight back and defeat them.

The UDC has been facing more scrutiny and opposition in the last several years, including public counterprotesters at their last annual convention. Despite surface rhetoric denouncing white supremacist terrorism, they still continue their usual tactics when it comes to defending their racist monuments, using their extensive financial resources to sue and countersue. But they are increasingly vulnerable. We are on the verge of wounding the UDC where it hurts the most: their pocketbooks and their reputation. We hope to draw enough negative attention to their annual convention that the next one becomes harder or impossible. As more and more people condemn UDC racism and their membership rolls decrease, they will no longer be able to indulge in their racist lawsuits and ultimately cease to exist.

ARTICLES ABOUT THE UDC:

‘The lost cause’: the women’s group fighting for Confederate monuments

The Guardian, November 2018: “Taxpayers indirectly underwrite the group’s work. Each year, the Virginia budget awards the state UDC tens of thousands of dollars for the maintenance of Confederate graves – more than $1.6m since 1996. UNC-Chapel Hill said it had spent at least $390,000 since the Charlottesville riots for extra security around Silent Sam.”

Salon, October 2018:“It’s helpful, in the midst of any conversation about this country’s Confederate monuments, to understand who put these things up, which also offers a clue as to why. In large part, the answer to the first question is the United Daughters of the Confederacy, a white Southern women’s ‘heritage’ group founded in 1894.”

Facing South: the online magazine of the Institute for Southern Studies, June 2018: “Perhaps nothing illuminates the UDC’s true nature more than its relationship with the Ku Klux Klan. Many commentators have said the UDC simply supported the Klan. That is not true. The UDC during Jim Crow venerated the Klan and elevated it to a nearly mythical status. It dealt in and preserved Klan artifacts and symbology. It even served as a sort of public relations agency for the terrorist group.”

TWISTED SOURCES: How Confederate propaganda ended up in the South’s schoolbooks

Facing South: the online magazine of the Institute for Southern Studies, April 2019: “Where does it come from, the ignorance that has been on display of late? In the college-age photos of white men, now elected officials, in blackface? In the simulated Klan lynchings for yearbook laughs? In mischaracterizations of black slaves as ‘indentured servants?’ In the denials that slavery was the central cause of the Civil War? [….] The poisonous Lost Cause lessons were taught to multiple generations of Southerners to uphold institutionalized white supremacy — in part through public school curriculums shaped by the United Daughters of the Confederacy (UDC). More famous these days for their controversial Confederate monuments, the UDC had an almost singular focus on making sure the Lost Cause propaganda was so ingrained in the minds of Southern youth that it would be perpetual. Their most effective tool? School textbooks.”

The Southern Poverty Law Center: “In this regard, neo-Confederacy is best viewed as a spectrum, an umbrella term with roots dating back as early as the 1890s. It applies to groups including the United Daughters of the Confederacy (UDC) of the 1920s and those resisting racial integration in the 1950s and 1960s.”

The Nation, March 2019: “Perhaps no monument more overtly attempts to corrupt both history and morality than the Heyward Shepherd marker in Harpers Ferry, West Virginia. Erected in 1931 by the United Daughters of the Confederacy (UDC), the white-Southern-ladies group responsible for the majority of Confederate monuments, the Shepherd memorial was the result of a campaign that began at the turn of the century. Tennessee UDC member Mary M. Solari in 1905 called for the construction of a loyal-slave monument, declaring it would ‘prove that the people of the South who owned slaves valued and respected their good qualities as no one else ever did or will do.’ The choice of Harpers Ferry for the location of the marker, given the generic working title of ‘Faithful Slave Memorial,’ underscored the UDC’s reactionary pro-slavery agenda.”

The Costs of the Confederacy

The Smithsonian, December 2018: “Significantly, Virginia disburses public funding for Confederate graves directly to the United Daughters of the Confederacy, which distributes it to, among others, local chapters of the UDC and the Sons of Confederate Veterans. Since 2009, Virginia taxpayers have sent more than $800,000 to the UDC. The UDC, a women’s Confederate heritage group with thousands of members in 18 states and the District of Columbia, is arguably the leading advocate for Confederate memorials, and it has a history of racist propagandizing.

Time to Expose the Women Still Celebrating the Confederacy

The Daily Beast, November 2018: “‘The UDC always had ties to the Klan,’ says Heidi Christensen, former president of the Seattle UDC chapter who quit the group in 2012. ‘But the connection became more overt in the 1910s. You’ve got Birth of a Nation, and then the second rising of the Klan, and you see [the UDC] openly revering the KKK and defending them as saviors of the white southern race during Reconstruction. Those things made it clear they were loyal to the Klan and saw them as heroes. And in some ways [the UDC was] sort of like the KKK’s more feminine, genteel sister organization.’”

Incomplete list of the many monuments erected by the UDC.

The UDC in Numbers

monuments, buildings, plaques and other tributes to the Confederacy

States with UDC Chapters or Divisions

Years of racist lies, “Lost Cause”, and “Loyal Slave” propaganda

We are a diverse coalition standing together to fight organized hate.

We stand by the Points of Unity used in the 2016 response to the KKK on Stone Mountain:

Our solidarity is grounded in a shared opposition to white supremacy. In our coordinating efforts, we will not tolerate behavior that perpetuates the oppression of marginalized people.

Police, politicians, and government authorities will not solve the problem of racism for us. We must rely on each other to end white supremacy. We support grassroots anti-racist coordination in our schools, workplaces, and on the streets.

We aim to create a culture of trust, solidarity, and support in our mobilization. We recognize that participants have different ideas, abilities, and perspectives on how to best obstruct white supremacist efforts. Our opposition will be stronger if we understand our diversity as an asset.

Our diversity means that no one person can speak on behalf of all participants in the actions against white supremacy. No person can decide the actions someone else should take. We must be conscious of how our actions impact those most vulnerable and at-risk amongst us.