On February 2nd, 2019, the KKK and Neo-Nazis planned a hate rally at Georgia’s Stone Mountain Park. 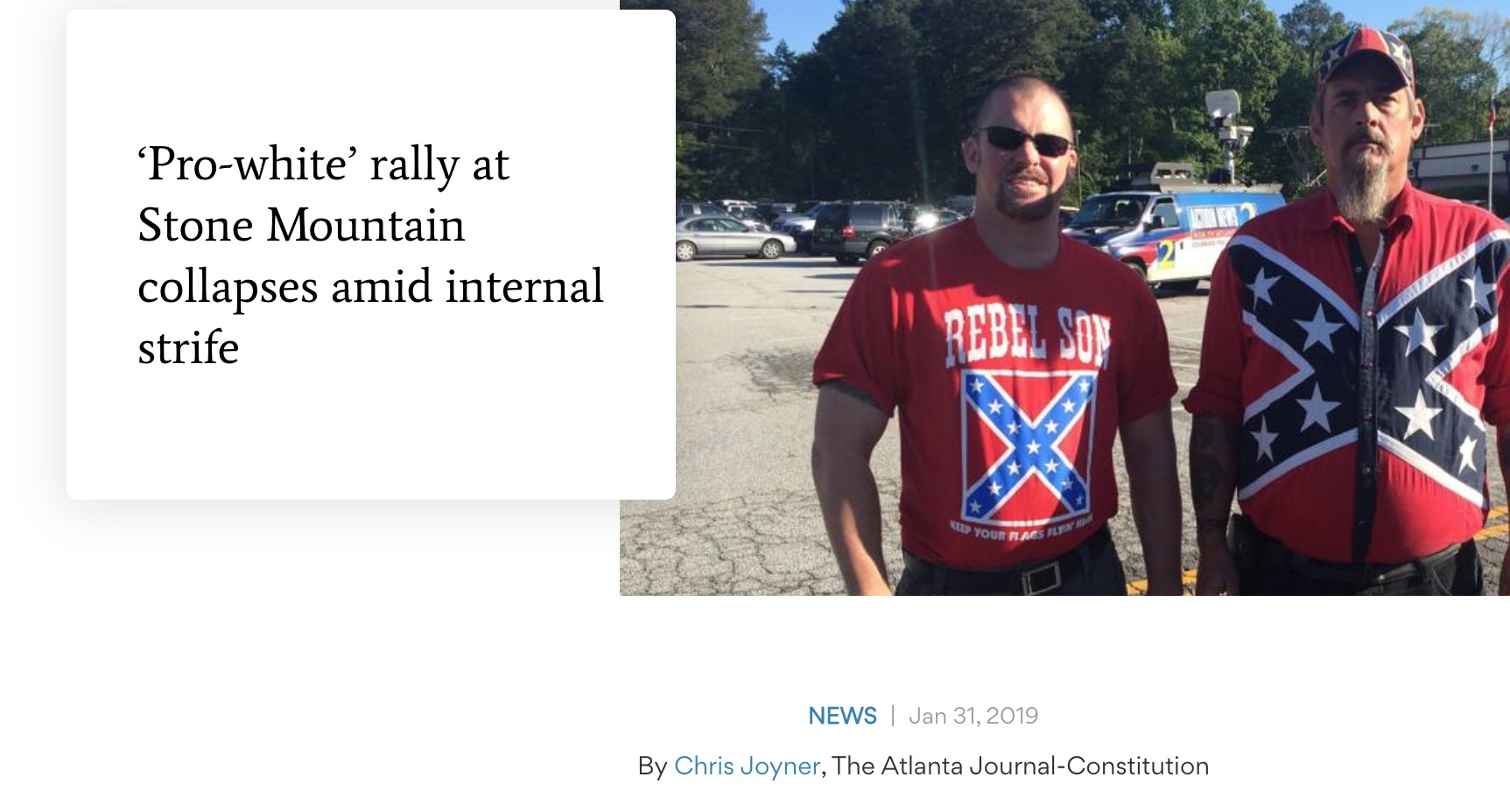 Atlanta Journal-Constitution: A Saturday rally at Stone Mountain by small group of white supremacists and white nationalists seeking to grab media attention during Super Bowl weekend has collapsed amid apparent infighting and fears for their personal safety….

Later, a statement released by the umbrella group representing the counter-protesters described the cancellation as a “complete vindication of the broader anti-racist strategy of relentless opposition to white supremacy.” The statement said the counter- protest would continue as planned “but in a spirit of celebration.” “We encourage the whole community to show up and celebrate this victory,” the statement said.

From the FLOWER Power Flyer distributed at the celebration march on February 2nd:

WHY CELEBRATE?
Neo-Nazis and Klansmen attempted to hold a white supremacist rally at Stone Mountain Park on February 2nd, in order to take advantage of Super Bowl publicity. FLOWER, an anti-racist coalition group, was formed in response. Our opposition has been so relentless that the organizers were forced to cancel their rally at the last minute.

WHY CONTINUE TO FIGHT?

Because the racist carving that currently defaces Stone Mountain remains a lightning rod for further white supremacist rallies. Until it is sandblasted off the side of the mountain, the community risks further random invasions. The racist organizers are already planning new challenges and making terroristic threats.

WHAT DO WE WANT?
Long-term: a world free of racism and oppression. Short-term and local: a community Truth and Reconciliation process around Confederate monuments in Georgia. The people living in and around Stone Mountain have never been surveyed as to whether they want the carving or not. Let’s start that process.

We stand by the Points of Unity used in the 2016 response to the KKK on Stone Mountain:

Our solidarity is grounded in a shared opposition to white supremacy. In our coordinating efforts, we will not tolerate behavior that perpetuates the oppression of marginalized people.

Police, politicians, and government authorities will not solve the problem of racism for us. We must rely on each other to end white supremacy. We support grassroots anti-racist coordination in our schools, workplaces, and on the streets.

We aim to create a culture of trust, solidarity, and support in our mobilization. We recognize that participants have different ideas, abilities, and perspectives on how to best obstruct white supremacist efforts. Our opposition will be stronger if we understand our diversity as an asset.

Our diversity means that no one person can speak on behalf of all participants in the actions against white supremacy. No person can decide the actions someone else should take. We must be conscious of how our actions impact those most vulnerable and at-risk amongst us.

From the Initial Call to Counterprotest:

Stone Mountain is the birthplace of the modern KKK and a continued site of historical importance for the Klan. The carvings of Confederate generals on the side of the mountain were commissioned by white supremacists as a testament to the values of the Old South. The Park was purchased by the state of Georgia as a direct affront to the Civil Rights movement. The preservation of the monument (and others like it) is enshrined into Georgia law. This racist legacy lives on, and organized white supremacists, emboldened by the election of Trump, want us to be afraid.

In the face of all these horrors, we are not powerless.

Immediately after the murder of Heather Heyer in Charlottesville, 40,000 people took the streets to shut down white supremacists in Boston. Across the Southeast, Confederate monuments – once thought untouchable – came crashing down through protest and mass action. In April 2016, anti-racists converged on Stone Mountain to shut down the KKK.

Political tensions have grown over the last few years, and white supremacists have been steadily bolsterered by rhetoric from Trump and other political leaders. Anti-immigrant attacks, border militarization, anti-semitism, sexual assault, and the erasure of trans-identity are daily battles. The president has even attacked birthright citizenship: the cornerstone of legal rights for minorities in this country. Pipe bombs are mailed to public figures who criticize Trump. Far-right militias are forming across the nation, and white supremacists are becoming more public and outspoken. Violent attacks against minorities at synogogues and Black churches have escalated since Dylann Roof’s massacre in 2015.

And here in Georgia, thousands of mishandled votes this November showed us that politics alone cannot stop the violence. If we want to change this reality, we must organize.

These are the groups who endorsed our event on Feb. 2nd, 2019. They include faith groups, farms, labor unions, civil rights organizations, anarchists, socialists and many others.